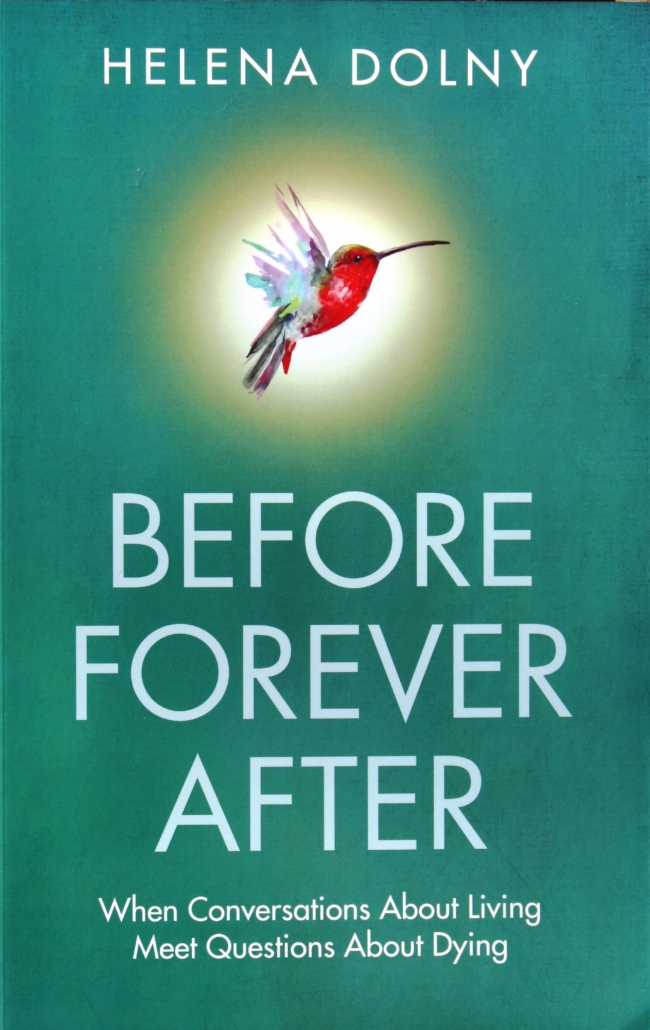 The subject we should be all dying to talk about

BEFORE FOREVER AFTER: WHEN CONVERSATIONS ABOUT LIVING MEET QUESTIONS ABOUT DYING

It’s always too soon, until it’s too late. That’s the mantra of American NGO The Conversation Project, created to help people talk about how and where they hope to die.

They could be struggling to stay alive at all costs in hospital, surrounded by beeping machines or in the familiar comfort of home surrounded by those they love. Most people hope for good deaths — except for comedian Woody Allen, who wittily observed that he’s not afraid to die: “I just don’t want to be there when it happens.”

Helena Dolny conducted eight years of exhaustive trans-continental research on the topic of dying. She interviewed lawyers, palliative caregivers, social workers, spiritual advisers, priests, funeral undertakers and Archbishop Emeritus Desmond Tutu — “everyone who might have a hand in how we live and how we die”, she says.

“We need to engage in death-in-life conversations as part of everyday living,” she elaborates and quotes Tutu saying, “this taboo about not talking about dying needs to be challenged”.

One of the most striking examples of how this is done comes from La Crosse, Wisconsin in the US, nicknamed “the town where everyone talks about death”.

Dolny explains that townspeople who don’t have a plan for their deaths are exceptions. About 96% of people who die in La Crosse have “what is called an advance directive detailing your post-death wishes”.

There, talking about death is a comfortable conversation and neighbours gossip about those who haven’t filled out their advance directive, according to Planet Money.

“In La Crosse, longevity is higher than the national average for that socioeconomic cohort. This is due to people having the conversations when they are not sick, panicked, stressed and dying,” says Dolny.

End-of-life care costs in the town are two-thirds of the national US average, “which is amazing because people spend more in the last couple of years of their lives than in the rest of it”, observes Dolny.

This is due mainly to exorbitant medical costs that prolong life, often in expensive healthcare and old-age facilities.

Increasingly, research on bereavement shows that children should attend funerals.

IF DEATH IS SEEN AS PART OF LIVING, THERE’S LESS SUFFERING WHEN A LOVED ONE GOES.

“If death is seen as part of living, there’s less suffering when a loved one goes,” Dolny writes.

She wrote her book “because people are detaching themselves from death, distancing themselves from having discussions about it and then they are not prepared when it happens. Death is sad, but it’s my observation that there’s even more suffering when conversations have not been held.”

Decades ago, when people died at home, “their bodies were washed there and a wake was held. Today, people die in hospital, the system takes over and if you see them again, it’s in a funeral parlour”.

She tells the story of a mother whose wish not to be cremated was ignored. Of her three sons, two fought bitterly over where her ashes should be scattered and subsequently had nothing to do with each other. The angry elder brother declared that his brothers would each receive a packet in the post with half of the ashes. “You do with them what you want.”

In another tale, Dolny writes about a man who was devastated by his mother’s decision to divide his father’s ashes between a garden of remembrance and the sea. “Whatever you do, don’t divide me up,” the man implored his partner.

The book had its genesis in a series on dying in City Press newspaper. “People started sending me their stories and one led to another, with people putting me on to their friends.”

She writes “for the love of it” and works as a coach at Henley Business School. She also has personal clients. This is her third book. Her second, Banking on Change, grew out of her years as CEO of the Land Bank, a troubled time during which her life was threatened.

Dolny was born to immigrant parents in a British Pennine Valley town and she writes in the prologue of the book that her father walked to a cemetery immediately after her birth, which she regarded as “quirky”.

“Now I think of it as auspicious … I have made several life choices which have resulted in death and dying becoming a consistent life partner.”

She was a close friend of anti-apartheid activist Ruth First, and ran to her Maputo office when she heard First had been blown to pieces by an apartheid-government letter bomb. Many of her activist colleagues died and she lost her second husband, Joe Slovo, to cancer.

So, it’s no surprise that Dolny begins her book describing how she is preparing to die in a forest near San Francisco. She attended a course there that explored life, death and the rites of final passage — “we had been asked to envisage our final hours of life in a solitary place”.

She has shown her extraordinary dedication to her topic and the substantive book is a pleasure to read. It comprises a series of stories, her own, her family’s and friends. “I chose those with an Aesop’s Fables essence to them,” she says.

Family secrets “always get everyone worked up”, she says. In her book, there’s the story about a young man who learnt that his “dad” was not his biological father and a girl who learnt at the age of 18 that her older sister was her mother.

“I didn’t want to give advice, I wanted readers to think about each story but not to be bound by it,” Dolny says.

The conclusion consists of a series of scenarios followed by questions for conversations: “I want you to begin to create your own narratives, your own stories for your own families.”

Ever tried writing your own obituary?

Time of Solstice…Time for Reflection
Scroll to top