I find comfort in acknowledging how we are shaped by the ones we loved or who’ve significantly touched our lives who while they may predecease us, in their having shaped us, they live on within us.

I’ve spent some hours thinking about Archbishop Emeritus Desmond Tutu, or rather “The Arch” as he was affectionately called by many.

He died on 26 December 2021 in the middle of our end-of-year holiday season. I was fortunate enough to have walks on beaches. I found myself thinking of “The Arch” and more attentively picking up litter, the plastic wrappers of snack packets, cigarette stubs, beer bottle tops. The phrase from my catholic childhood liturgy (Luke 22:19) echoed in my mind, “Do this in memory of me.” The Arch was known to pick up litter. On his 82nd birthday in October 2013 Tutu and members of the Desmond and Leah Tutu Legacy Foundation spent time in Cape Town’s Joe Slovo park, cleaning up litter along Democracy Way.

That year I sat with The Arch and interviewed him about his thoughts on dying. A year later, in 2014 The Arch supported my application for a Rockefeller writers-in-residence award in Bellagio to work on my book “Before Forever After: When Conversations About Living Meet Questions About Dying.”  Which I finished and published in 2017.

I was a minor person on the periphery of the life of “The Arch’ but he, unknowingly, was much more central in the way he’s shaped my life. Since his death I spent time considering his impact and came up with eight compass points which I will continue to live with and be influenced by.

When I shared with him how hard I found it when people who you were close to, admired and respected, reacted very negatively to my public support for assisted dying (I was Chairperson of DignitySA at the time), he told me I must (metaphorically speaking) get a tin hat, and be ready for the blows, as the consequence of standing up for what you believe in. He also then made me laugh when he told me that sometimes, when he and Leah disagreed over a matter, he would say, “You are entitled to your wrong opinion!” He suggested that friendship would transcend difference of opinion.

It’s hardly surprising that his last book, “The Book of Joy”  is drafted from dialogues with the Dalai Lama, a Buddhist,  with Doug Abrams (Jewish) creating the final tapestry contributing his own writing and editorial skills.

Dear friend, thank you for writing. Having retired from public life, and now well into my dotage, I derive great joy from the letters I receive keeping me abreast of developments in the lives of those we love. Should you be writing for an endorsement or pubic support – of any kind- you would truly warm the cockles of this old man’s heart if you directed your request to someone a little younger and more dynamic than I, thus contributing to a new cadre of voices for tomorrow. The only requests my office can consider are those directed to archpa@tutu.org.za. Such requests will be included in weekly administrative meetings with my PA. Thank you and God bless you

But a couple of days later, The Arch, still having sight of these mails would often respond using his iPad. I had sent him the outline of my first LoveLegacyDignity talk delivered in Washington. He wrote.

I wish I could hear you give this speech.

Much love and blessings,

Sent from my iPad

A gesture of encouragement, warming the cockles of my own heart.

Trying to get people to have conversations about their mortality whilst they are very much alive is like pushing water uphill with a broom. It would be easy to quit the effort with an, “at least I tried, as best as I could, for a while”.

But Archbishop Tutu’s life inspires. It makes you see yourself as a cog in the wheel of history, and the importance of playing the longer game, and of committing to living the bigger life.  Of aspiring to live not only with small decisions which embody moral integrity in the domain of one’s personal life – but also seeing those actions, multiplied by others, then amplified into contributing –  in whatever way possible, to our being global citizens of this planet earth, responsible for the heritage we leave for our children and grandchildren. 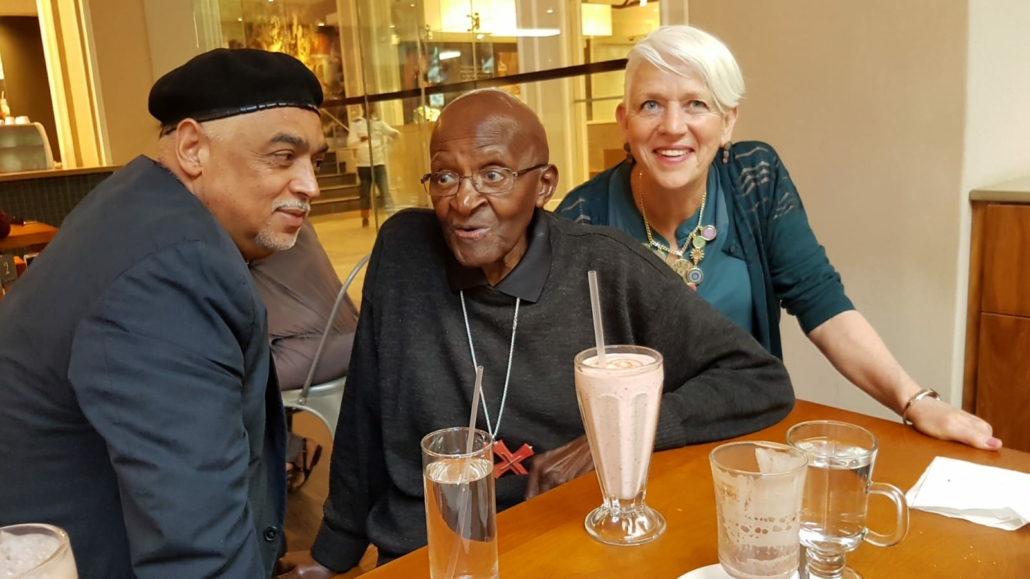 Michael Weeder, The Arch and Helena.

Coping with grief at Christmas